I’ve been in IT for longer than anyone can remember (over 40 years), and I’ve seen some amazing progress in computer technology, especially in offline data storage.

Got my IT start in the US Marine Corps way back in 1969. My first real job was 3rd shift computer operator for Marine Corps Base – Kaneohe, Hawaii.

DPP-10    Marine Corps Base – Kaneohe, Hawaii – 1971
That’s me standing under the sign
We are in front of a “mobile data center” ready to be deployed to the field

Let me describe how far the technology has come in the last 45 years.

My computer operator job was to run daily, weekly and monthly reports for the air wing of MCB-Kaneohe, , , it included all types of reports concerning personnel, aircraft, equipment, parts, etc. , , , normal reports like you would expect.

At this juncture we used 80-column cards to store information about a record. A “record” might be a jet aircraft or helicopter, a Marine pilot or fireman, or a piece of equipment. At the end of the month I had to sort the cards and print several detail reports for Marines to manage the business.

In one application called FSA (Fleet Stock Accounting), the owners of the data brought me some 50,000 cards every month of all the detail records of their equipment and parts inventory. They were stored in some 15-20 metal trays that held approx. 3,000 cards each.

How long does it take today? Just a few seconds to initiate the report, maybe a few minutes to produce and print it, , , that is if you actually want the printed version.

Every end of month I would literally spend an entire weekend in our Data Center to create the monthly reports for this application.

External data storage has evolved considerably so I thought it might be fun to take a look at how it took place. I’ve actually worked with everything you will see in the discussion below.

The beginning
Paper is where it all started. Before computers everything was on paper. Do the images below look familiar? 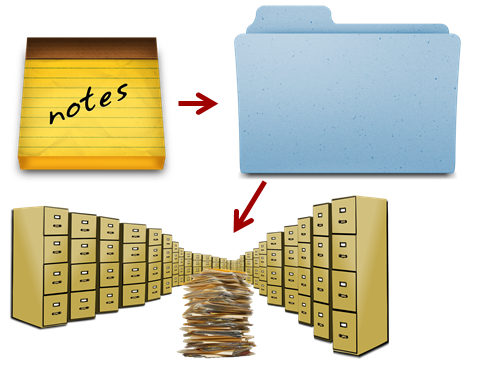 The first computers used punch cards
The first was the 80-column card followed by a smaller 96-column card that allowed for smaller equipment and 20% more storage on a record.

At Kaneohe we used IBM equipment – the 1401 Computer System.

Punched card processing took lots of equipment to do very specific things like sorting, collating or merging card decks, interpreting and printing newly punched cards, etc. Lots of equipment and a very manual, tedious process, , , but it was light years ahead of pencil and paper.

Along came tape and “magnetic media”
At first, vendors like IBM simply added a tape drive to complement their card system like the 1401 processing environment below.

Do you remember the old tape libraries? Larger organizations literally had dedicated resources just to manage the tapes.

Disk storage opens up new horizons in storage capacity, speed and reliability.
Initially there were removable disk packs that increased in size over time to hold more data. Then more versatile drives came along with considerable more storage and speed and built to be more sturdy.

The diskette era
Diskettes hit the scene with the IBM System/32 around 1976. This system used an 8-inch “floppy diskette” for backup and software portability. With the introduction of the minicomputer and emphasis on business applications software to run on them small and mid-size businesses could afford to computerize their business.

You can see the trend – smaller media with more storage capacity plus they  are becoming more damage proof with simpler read mechanisms as the technology evolves.

The race is on
Newer applications include more data, images, video and audio, , , applications that literally devour disk space. The need for more storage space, faster access times, and portable media is the new era of computing storage. As technology improves, the advances in these areas move forward faster.

Flash drives started out with 16MB, 32MB and 64MB when they were first introduced. Now you see flash drives no bigger than your thumbnail that hold upwards of 512GB and there are plans to put up to 2TB of data onto a flash drive in the near future.

External backup drives like the one shown above are already storing terabyte levels of data with enormous growth expected in this area in the future.

Summary
Let me put some of this into perspective for you. In 1979 I had a tour of IBM’s General Systems Division (GSD) Headquarters and Data Center in Atlanta, GA.

I’ll never forget a sign that was in the front part as you entered the Data Center. Behind the sign were rows upon rows of disk drives followed by rows and rows of tape drives. The floor that housed the Data Center was probably around 30,000 square feet and much of it held disk drives for data storage. The sign said, , ,

You have to understand, , , 16GB was huge in those days, , , but there was no graphics or video to contend with so a gigabyte of textual data was quite a lot.

Today, I carry a 64GB flash drive the size of my thumbnail with me wherever I go and my laptop has far more computing power and functionality than all of the mainframes in that IBM Data Center. Amazing evolution of computing technology, , , plus it becomes more affordable all the time. A terabyte of data storage in 1979 would have cost you over $1 million, , , today about $75.00.

The next 10 years will be an amazing experience.