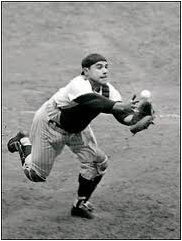 Some of you may not know who Yogi Berra is. Well, , , he was a famous baseball player who played for the New York Yankees from the late 1940’s to the mid-1960’s.

He was a great catcher and was voted Most Valuable Player of the American League three times and hit the most home runs for a catcher by the end of his career. His New York Yankee teams played in 14 World Series winning 10 times, a record at that time for a player.

He was a very successful baseball player and one of the most quoted people in the world. But, it isn’t his baseball that made his so famous.

What Yogi is more noted for are the press quotes he was famous for saying.  They are unique to say the least.

There were many, , , so many there is a book titled, The Yogi Book. One of his press quotes is on the cover, “I really didn’t say everything I said.”

Here are just a few. See if you have heard any of them:

“You can observe a lot by watching.”

“Nobody goes there anymore; it’s too crowded.”  Talking about a restaurant.

“A nickel ain’t worth a dime anymore.”  One of my favorites!

“It’s deja vu all over again.”

“90% of short putts don’t go in.”  After missing a putt in a charity golf event

“When you come to a fork in the road, take it.” Another favorite of mine

“Always go to other people’s funerals; otherwise they won’t go to yours.”

“You’ve got t be careful if you don’t know where you are going ’cause you might not get there.”

“The future ain’t what it used to be.”

I have a copy of this book sitting in my office and pull it out ever now and then when I need a break from the work. Yogi took his profession seriously but he wasn’t so serious to forget about the fact there are other things important in your life. He was successful and had a sense of humor.

Wouldn’t you have to have a good sense of humor if you said these things?

Like Loading...
This entry was posted in Just for FUN !! and tagged famous quotes, yogi berra, yogi quotes. Bookmark the permalink.