Brick walls are made to hurdle 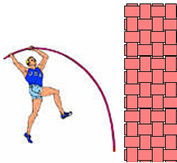 Do you have challenges?

Are obstacles in your way?

If so, what are you doing about it?

I receive lots of inquiries from managers around the world who describe the “brick walls” they have in their situation that’s preventing their success. It’s anything from:

Well, “brick walls” and life’s challenges are made to hurdle. To an extent, problems are just excuses. The reality of things is that we are in more control than we often think we are.

Do you remember when the 4-minute mile was broken, , , or the pole vaulter topped 18-feet?

The 4-minute mile was broken by Roger Bannister in 1954. Prior to that, scientists and athletes believed it was physically impossible for a man to run a mile faster than 4 minutes.

What happened after Bannister ran the mile in under 4 minutes?

You got it, , , it became common place for runners to run the mile in under 4 minutes because the mental barrier had finally been broken. In fact, the record time for the mile has been reduced by some 17 seconds since 1954, , , impossible, they said.

When you have a “brick wall” in your life, it makes your situation tough to be sure, , , but that doesn’t mean you can’t succeed. Learn as much as you can about this “brick wall” obstacle, , , prepare yourself, , , develop a plan, , , seek outside help, , , and determine how to get over the wall.

You may not succeed the first time. I know from personal experience that I’ve skinned my knees and elbows, , , bloodied my nose a few times, , , and still have a few scars from trying to hurdle some of the “brick walls” in my career and life.

However, my belief is that most challenges can be overcome given the right motivation and preparation. In some cases, you may need to simply walk away from the wall because it is unrealistic to get over it, , , but have you tried bursting through the wall, , , going around it, , , digging under it, , , doing something different to get over it?

The objective is to get to the other side – right?

Before you walk away, take some time to “think out of the box” a bit and maybe even collaborate with someone who has dealt with these types of obstacles before, , , or possibly has some insight into.

If getting to the other side is worthwhile, don’t give up easily, even if at first you don’t succeed. Keep at it and whittle away at the obstacle, , , perseverance is a powerful attribute and trait of many successful people who dealt with their own “brick walls” before they achieved success, , , people like:

“Brick walls” are made to hurdle. Take a hard look at the obstacles in your situation and tackle them with knowledge, a positive “can do” attitude, , , and persevere. You might be amazed at the result.