Actually, I believe life is more than fair but it’s all about what you make of what you have to work with.

What made me think about this topic is my golf game and the results of the Hohenwald Invitational Golf Tourney we played in this weekend. Four of us have played in this annual event for well over 20 years. Chris Cantrell and Chris Ideker (the two in the middle of our team photo below) always team up against Larry Johnson and me. 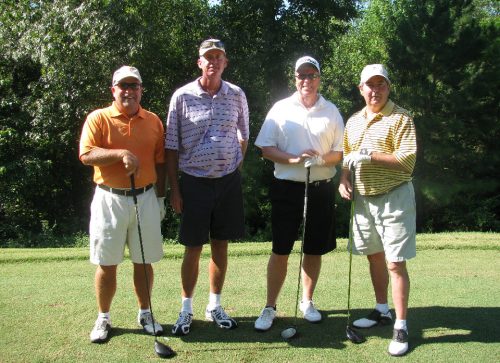 Larry and Chris C. are by far the best golfers although I used to be able to give them a run for their money until I stopped playing more then a few rounds a year. Been playing more this year but the results haven’t shown up yet, , , need more practice I think. Well, actually I know that’s the case.

It takes work to do anything well and golf is no exception. I’ve put in more time for golf this year but the last 20 years of very little play have coated on some thick layers of rust, , , and then there’s the fact that I’m not as young and flexible as I once was.

Still, I see a few positive signs from time to time, a good drive here, , , a couple of good iron shots to the green, , , a few nice putts. Soon, we will put a good round together if I keep on working.

Results of this weekend
Larry and I ended up paying Chris and Chris $3.00 so they get bragging rights for a whole year – OUCH! Our scores were not great but we had a great time as we always do, , , and after all, that’s the whole point. Larry and I have won three years in a row so it was time for the “other team” to rebound. If Larry’s partner (that’s me) had played well we would have taken the crown another year.

Weekend highlights
There were many actually, but none like last year when Larry made a hole-in-one. That was special.

Remember my post earlier this year about “Make a decision: Get in the game or get out”? Well, I have been playing and practicing to improve my golf game and even though I hit the ball poorly most of the weekend, there were some “all world” up and downs from just awful places, , , places you don’t want to go on this golf course. And, there were a few good tee shots and iron shots, , , not many mind you, , , but a few.

The good news is that I broke 80 for the first time this year and did it twice, , , the practice round on Friday and then again on Sunday. That’s under 80 even when hitting the ball pretty bad, , , so there is light at the end of the tunnel and more fun to come. And hold the presses, I shot even par 36 on the last nine holes.

This same principle works for managers, you know. Even when you perform poorly, there can be parts or moments that you can look to as making positive progress, , , you may just have to look for it. The key is to maintain a positive outlook and think of the good things to come. We become what we think, , , and I’m convinced that I’ll shoot under par once again. I’m a long way from that right now but it’s going to happen.

So, the morale of this story is, , , believe in yourself, put the necessary work in to prepare yourself, and persevere through the struggles that you will likely have during your journey. It would be nice if steady improvement was a straight line, but it usually isn’t. Be prepared for some falls along the way, but if you keep working at it, the goal you seek will ultimately be achieved.

If you had told me I would shoot 78 the way I hit the ball yesterday, I would have laughed. What’s even funnier is that it would have been 2 shots better (76) if I had just tapped in two putts, but I was so disgusted I mishit two backhand tap-ins. Took the extra strokes and went on.

The most positive thing of this weekend is that even though I struggled terribly, I never gave up and called it quits. I truly tried on every shot (except for those two backhanded tap-ins).  🙂  🙂

Take the lesson I learned from all of this in that often you are actually doing better than you think you are. Most of us in IT are high detail people and we can be our own worst critics, , , something we all need to work on.

Give yourself a  break and stop being such a perfectionist. Perfection rarely happens, and you don’t need to be perfect to do extraordinarily well in life and career.

My wife will read this post later and I can already hear what she will say, “Mike, you need to take some of your own advice.”

The great IT debate

There is a great debate within the IT ranks, , , ever wonder which side you are on?

The debate about whether the IT Manager should be technically competent or not has been going on since the first commercially available computer systems hit the scene in the 1960’s. This is not a debate fought in the “public eye” so many people aren’t aware it occurs in companies every day.

The debate is simple and there are definitely two different opinions in this one:

1.   The manager must be technically competent to know what the technology resource can do and how to manage such a person effectively.

“You can’t manage someone effectively if you can’t walk in his/her shoes.”

“You can’t stay technically proficient and manage effectively at the same time.”

Let’s address my position on the issue right up front. I am a “non-technical” manager. That means that I’m not an expert on systems, networks, or business applications. However, I am definitely technically oriented and was once proficient with certain technologies.

I now know how to identify issues that exist in a company’s technology and how to prioritize the project initiatives that need to take place to mitigate risk and to provide real value for the company.

In my opinion, the best IT managers are business oriented first and foremost and know how to apply technology resources to address company issues cost effectively. That’s who I am. Early in my career I was a technology expert on certain business applications and computer systems and liked the role very much.

You will never find me learning how to do data entry in a business application or to configure a Cisco (no relationship, , , and they spelled it wrong) router in a network.

As a CIO or an IT Manager, that’s not the value the company needs to get from me. My job as the manager is to organize and focus the resources on the issues that give the company the greatest payback for its technology investment. When you consider IT expenses usually run anywhere from 1% to as much as 10% or more of the company’s revenue, it is a big price tag for most companies.

In fact, being a technical expert will actually hinder you in a manager role.

You don’t have to be a technical expert to be able to identify issues that cause risk or that offer potential savings for your company. Experience, a solid understanding of the business operation and the industry, plus knowing how to achieve a true Return on Investment (ROI) are much more valuable than knowing the inside workings of an operating system or how the router works when you are in a management position.

The manager needs to know how to find the experts and focus them on the appropriate priorities, not do the job.

Don’t get me wrong, I believe in staying current with what’s taking place in technology. It’s changing more rapidly than ever before and every IT manager needs to stay current to some extent with the issues of the day.

Keeping up with what’s happening doesn’t mean continuing to be the expert. There simply isn’t enough time.

One of the best pieces of advice I got as a young manager was that to be effective, “You have to let go of the technology and the desire to be proficient in it when you become a manager. If you don’t let go, you aren’t spending the time or making the effort you need to in your management responsibility.”

Managing people and organizations is an entirely different discipline than being a technology expert. One of the problems technology organizations have everywhere is that too many managers are focusing on the technology and not on the business. That’s why you hear so much about “technology needing to be properly aligned with the business” these days.

A few years ago I conducted an IT assessment in a small manufacturing company. The proposal being presented to the CEO was a $350,000 upgrade to improve the company’s network. He called me in to take an objective look because he wasn’t certain it was an appropriate investment.

Key findings in my assessment were:

Are you getting the picture? The IT manager was a former network administrator and probably a very good one. The problem was that his focus was on the network technology that he understood, not on what the company needed. He was spending too much time dealing with technology and not enough time in understanding the business issues and needs.

The morale of the story is that we saved the company hundreds of thousands of dollars in a two week assessment and refocused IT on issues that had real value for the company. I’m all for spending and making investments in technology, but only when it provides value.

My recommendation is that when you have the opportunity to manage technology resources, focus in on the skills of management, understanding what the business needs and how to get things accomplished through your people. Let go of the need to be technically proficient.

If being the technology expert is what you like, great, , , take that path and you will probably be a lot happier and more effective.