Best weekend of the year – The Masters

If you are a golfer and have never been to Augusta National Golf Club, you can’t imagine what you have missed. When you first walk onto the grounds, you know this is something special.

As you walk past the historic clubhouse and out to the first tee you can see out over the course and you sense something magical about the place. This is truly hallowed ground with rich history and tradition unlike any other place in golf with possibly the exception of St. Andrews in Scotland.

One of the first things you notice is how elevated you are and how hilly the course is. The clubhouse and first tee actually sit high above most of the grounds, , , 200 feet higher than #12 and Rae’s Creek. When you walk the course, you learn firsthand how hilly it is; I can’t think of a single flat hole unless it is the short and dangerous par-3 12th.

The Masters Invitational Golf Tournament started in 1934 by Bobby Jones and a few of his friends. It has become one of the best and most recognized tournaments in the world.

As I prepare to watch the 2nd round of this year’s tournament, I thought it would be fun to write a post and share some of the interesting things about this great event.

A number of traditions and iconic images come to mind when you think of The Masters, , , things like, , , 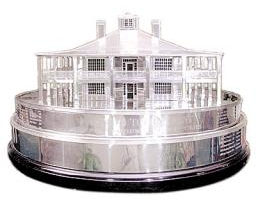 There are many, many more traditions and memories of The Masters. It is the best of what golf offers.

Posted in Just for FUN !!