Don’t you love those “little IT jobs” that are supposed to take 15-20 minutes and then after 3 or 4 hours you still haven’t achieved your objective? 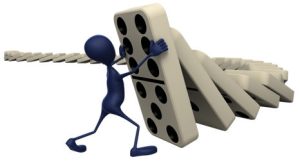 Yesterday afternoon after returning from our Camp Liberty I decided to install a new wireless router for my office. My plan was to install this new Linksys router for faster Internet access and then give my old router to an Aunt when I set her up a wireless network in her home later in the week.

My old router works fine, , , and Internet access is smooth and always works plus my wireless printer works well from all devices, , , a desktop, two laptops, an iPad and an HP TouchPad, , , nothing is wrong with the network I had in place, just thought the faster Internet access might be good.

I should have known better.

Installed the router easily and got Internet access immediately. So far so good, , , feeling pretty good about this project, but there is always something, , , right?

However, I could not print using the wireless printer. The printer finds the router but there is a problem somewhere between the router and printer. Switch the old router back in and printing fine.

However, now I can’t print from my iPad or TouchPad, , , can’t seem to find the printer. Initially, I could not print from anything but finally resolved the print issue from the laptops.

It’s not a big deal that we can’t print from the iPad or TouchPad, but it’s a nuisance that I can’t get out of my head so I’ll probably spend more time troubleshooting, , , something I don’t need to be spending time on .

20 minutes went into over 3 hours last night trying different things, Googling key word phrases to seek out the answer, , , even tying in a usb cable from the router to the printer. Could not get back to where everything works like it did.

The lesson for an IT manager is that good intentions do not always lead to positive results immediately, , , so think through those key improvements you think is needed for your company.

Granted, I’m not the most technical person, , , I’m capable of focusing and managing technology resources but not very good in actually doing the technical work any longer.

Plus, I’m sure the fix to my wireless printing problem is going to be pretty simple when I finally solve the problem, , , the frustration is that I just don’t need this kind of headache right now, , , your clients and users feel the same way when something goes wrong in their business operation.

So back to my point:

And one last point, , , I didn’t really feel like I needed faster Internet access, , , what I had worked fine and with the new Lenovo laptop it is already faster. I just thought, , , “it would be nice to have”.

Like Loading...
This entry was posted in IT Manager Tips and tagged don't fix it, it frustration, not broken. Bookmark the permalink.