Teamwork is not automatic in IT

This is an excerpt from my new book, 21 Secrets Every IT Manager MUST Know

SECRET #8 – Teamwork must be developed

It goes without saying that you need strong teamwork to become a successful IT organization, but did you know teamwork is not a natural thing for IT employees?

Probably not, so let me explain. 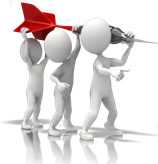 You see, over 90% of us in IT have two personality traits that actually work against teamwork to an extent.

First, almost all of us are technically oriented (a good thing), independent, goal oriented, and self-starters.

Most of these traits are good, especially as technicians or technology experts. However, this independent trait can be a challenge when it comes to working well with others.

In addition, over 90% (virtually everyone in IT) are high detail, , , also a good thing, , , you would think. For the most part, it is good, but one of the aspects of a high detail person is that they “like to do things their way”.

Let me get to the essence of what I’m driving toward. Technology attracts a certain type of individual and people with consistent personality traits. These traits summed up would describe an IT individual as someone who:

teamwork is not a natural or easy thing for IT employees

High detail people can dig their heels in and become stubborn about how things are done. IT people are smart and they have strong opinions about things, , , it can be a real challenge to build teamwork for an inexperienced IT manager.

What this means for an IT manager is that you have to build teamwork in your organization, , , that’s right, it is up to you to make it happen because it’s not going to happen automatically.

The good news is that building teamwork and camaraderie is the most fun aspect of being an IT manager, , , at least, I think it is.

I used to coach my teams a lot about, “We will succeed as a team; if the team fails none of us will be successful.”

The key is to create focus and coach your employees on working together positively.

Focus is provided by creating an IT strategy, running projects like projects, and delivering solid employee performance plans and reviews. When you deliver these, you always want to reinforce teamwork and the positive benefits of working together as a team.

Another opportunity to reinforce teamwork is when you have staff meetings. I like to hold them at least once a month and in every meeting there is something to reinforce the importance of teamwork.

Example
I joined a company to run their IT operation of some 35 employees. They lived in two different cities and it was obvious there were teamwork issues with the groups.

Shortly after joining the company I held an IT Kickoff Meeting to bring them all together and to refocus everyone to our company’s mission and the IT strategy I built to support this mission. The meeting had a key theme – TEAMWORK.

To have some fun, we divided the groups into three teams (Managers, City#1, & City#2) and created a competition among them to stress the importance of teamwork. Each team had to do a short skit (a play of sorts) that emphasized the teamwork message. Our management team presented a message of,

“Put your oars in the water and row together, and we will be successful.”

The bottom line here is that teamwork occurs when managers cause it to happen, , , it doesn’t happen all on its own.