Too many diskettes, , , an old but funny story

In the early part of my career with IBM, I was able to sit in on a national customer service desk in Atlanta for a week to support a hospital software package that I was very familiar with.

On the 3rd day, I receive a call from a hospital employee from Kansas, a nice lady, who was having some difficulty. 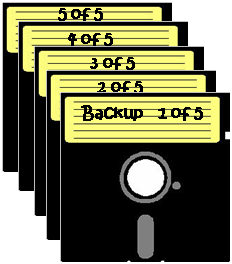 First some background: In those days and the system this lady was using, the data backup was completed using large 5 1/4-inch diskettes. In the old days, we called them “floppy disks” because they truly were a bit “floppy”.

When performing a daily backup, the system copied to a diskette until it was full, and then asked for another, , ,  and then another until the backup was completed. The system put a number notation on each diskette’s header record so it knew the proper sequence in case a recovery was required.

When the lady called, she was trying to restore her data from her backup diskettes for some reason and had encountered a problem. I asked a few questions and thought I understood her problem. The system error message she was getting sounded like she had inserted the wrong diskette, , , in other words I thought she might have gotten them out of sequence.

So, I asked her to do the logical thing – “It sounds like the diskettes are in the wrong sequence so try inserting the next diskette you have.”

There is complete silence on the other end of the phone.

I asked, “What’s happening? Are we working properly now?”

She answers, “No. I’m getting a different error this time.”

She reads me the computer error message. This message sounds like a hardware error, , , now, I’m more confused.

She responds with an answer I’ll never forget, , ,

“Honey, I have two diskettes in there already and I can’t put the third one in; it won’t fit !!”

The lesson – be sure the person on the other end understands exactly what you are saying.