Every year, my family and I celebrate Father’s Day by watching the US Open golf tournament. This year’s Open was held at Pebble Beach and brought back some very fond memories from 1992.

Our son, Eddie, was a pretty good golfer, , , a 3 handicapper at 15 and he was improving all the time. In 1992, Dorine, Eddie, and I took a trip to Pebble Beach to watch the ’92 US Open. Eddie was 15 and this trip was a very special time that I’ll never forget.

Just six months later, Eddie had a terrible automobile accident and we very nearly lost him. Fortunately, he survived but golf and the bright future he had were taken away. Eddie still likes to watch golf and I’m so thankful that he can understand what’s happening and can communicate about it, , , for a long time during his recovery, he couldn’t. Eddie had to learn everything all over again.

Eddie is one of the most positive people you will meet and he never has a bad day, , , although he deals with pain every day and many other challenges. He is truly thankful that he survived the accident, even though he misses out on so many of the things he would normally be able to participate in.

Eddie is 33 now and today was very special, , , watching the US Open, , , reminiscing about our trip to Pebble Beach in 1992, , , discussing what we thought about Tiger, or Ernie, or Phil’s good and bad shots.

In life and in business, we all have ups and downs. How you handle the bad times and what you do about them tells people a lot about your character and your belief system.

Eddie has recovered about 60-70% from where he would be had the accident never happened, , , but the fact that he enjoys life and people he comes in contact with, , , and they enjoy him, , , is a profoundly good thing. Our lives changed forever on January 2nd, 1993 when Eddie had his accident, but because of it we have been blessed by so many things, , , people we have met, , , my career change, , , living back in middle Tennessee, , , so many things to count.

The point is that even though terrible things happen to us all from time to time, it is important to look at the positives that come from them rather than dwell on the negatives. Dorine and I always saw the positive steps Eddie was able to take when many could only see how terrible his situation was.  I don’t say this to suggest Dorine and I have any answers or that we are strong people, , , more appropriately, I think that Eddie’s progress (even though limited) in some part comes from the positive energy and encouragement we were able to create for him.

I remember when he was able to put a baseball cap onto his head by himself for the first time, , , it was an exciting day.

I remember running to the refrigerator when he asked if he could have some apple juice after not drinking any liquids for two years, , , an unbelievable step forward for him.

Life is what you make of it. Our life is different from what we thought it would be, , , but we are so grateful we are able to have the life we have with Eddie. 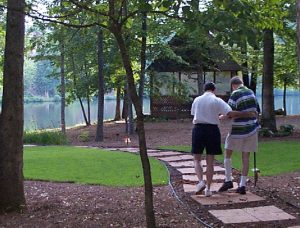 In business, look beyond the negative situations you may have and to the bigger picture. If your situation is bad, maybe even terrible, , , it will get better, , , plus you don’t have to look very far to find someone who has a much more difficult situation than yourself.

Stay positive and look to the future, , , and enjoy the special days with your family.

By the way, for Father’s Day, Eddie and Dorine gave me a hammock, , , planning to give it a trial run this week. I hope you had as special a Father’s Day as we did here at the Sisco’s.